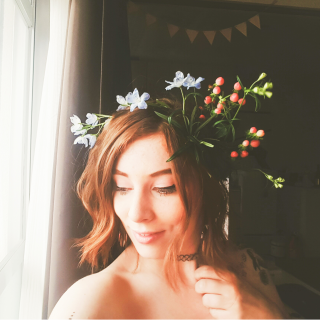 View while breastfeeding from the forest floor
I've looked forward to this for so many years, for so many lifetimes. To choose my little one before anything else. To center my reality on welcoming a new Sacred Being to this planet. To show her the way through the woods. To bestow her with a sense of destiny. To give her the tools she needs to be a steward of this garden.
A little poem inspired by the sculpture & art of Julia Adzuki (who I am so thankful to have learned from in the forest guardians course with @advaya.co !)
I'm making new things
🌼 Here's what my #tarottuesday looks like: a deep dive into my anxiety around "next steps." More specifically... Why am I finding it so hard to live in the present? What preoccupation is causing me to always need a plan, a next move, a strategy? When was the last time I simply enjoyed my life as it was, and relished the moments in it?
It looks like we just might get a reprieve from the drought today. I felt a single raindrop on my forehead, and I'm just grateful. Our apple trees are going to be key for preparing baby food this year, especially since we had to prune the bulk of our pear trees and will lose over half their fruit. Sourcing my daughter's nourishment directly from these trees made me think of this quote from William Makepeace Thackeray, about the strangeness of having lived old ways in new times. As Isidora grows, I hope to pass this to her - a farm to table experience in the middle of a city, a gratitude for Idunn, Pomona, and the many goddesses of the trees that nourish us.

I haven’t touched enough of America to conjure an archetype or a memory that can stand in for the names of these corners and borders. But where I have traveled my ears tingle at the mention of their names. Navajo Nation. Denali. California. Atlanta. Utah. Names followed by numbers, numbers followed by faceless ghosts.

Numbers. Numbers that are announced, day after day, at the close of business. A death toll from a nightly news pulpit. There are no church bells or gothic choirs to accompany the address. The woman on the television states more places, places I’ve never been, as her voice is laid over short scenes of downtown Lincoln crosswalks or roadside diners in North Dakota.

It’s the sense of infinity in these numbers that haunts the most. It’s not unlike looking up at the innumerable stars of the night sky, somewhere deep in Alaska. Each star unique, special, and distant; unknowable by me, but glorious in its power; yet lost in the whole. But where there is awe in the sanctity of stargazing, the numbers flashing across the television are a disappearing act of so much starlight I haven’t yet known.

There are hardened souls who turn their backs to these coffins. These coffins carry someones we can’t know but someones we can fathom. Mothers with the perfect rainy day soup recipe. Fathers who ultimately came around to embrace their son. Siblings who found reconciliation after years of distance. Religious leaders who acted as family to the lonesome. Grandparents who were making plans to surprise the grandchildren at Christmas.